And so it's over, all except for a day of waiting for my flight to leave Luanda, and 22 hours of flights and layovers...plus customs clearance, etc. It's pretty much over.

The final was an exciting game, well attended by the people of Angola. In fact, at the start of the game it looked like there would be a lot of empty seats, but when I scanned the stadium at the start of the second half, I think it's fair to call it a sell-out. I was touched at the end of the match, as the Egyptian players celebrated, that the crowd broke into a spontaneous chant of "An-GO-la, An-GO-la, An-GO-la!" 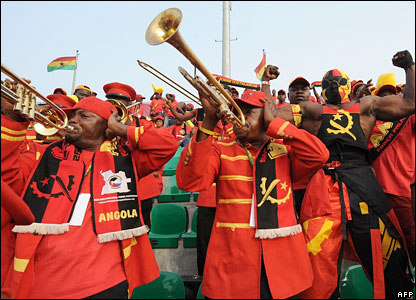 All things considered, I think the people in Luanda deserved to blow their own horn. Getting to these game, and home from these games, was no easy feat for anyone. Last night, it took us three hours to work our way back to the city (again, it's about 15 miles), and we witnessed a bad-looking four-car accident and a subsequent gathering of people in the street that had Ricardo and me wondering if there'd been a fatality.

The drive home was especially stressful for my man Ricardo, who said at one point, "Mr. Jeff, my head is hot (rhymes with boat)." He apologized profusely and asked if it was ok if he opened the window and had a smoke. "No problem," I said. When we got home, I had a cold can of Cuca in my fridge (leftover from the night when Payzin hopped out of the truck to buy a sixer) and Ricardo accepted it without hesitation.

As frustrating as it's been for me to sit in never-ending traffic jams, I can imagine it's been even harder on the guy behind the wheel. See, it's not just traditional traffic, it's also folks trying to circumvent the traffic by turning two lanes into three, four or five, and sometimes folks driving up on curbs, through road-side ditches etc. And there are also the scooters that seem to come out of nowhere.

I can't imagine driving through this, though I did joke with Ricardo that on my next trip to Luanda I'd just rent a car. "You think so, Mr. Jeff?"

And so it's over, all except for the actual work that comes now, the transcription of interviews, the organizing of material and the writing of my "real" stories. I've been doing this blog sporadically for the last year or so, but it seems these tales were able to reach more than just my normal circle of friends (see some of the comments), and I'm happy that people have gotten some easy entertainment and even enjoyment out of them.

It was not the easiest place to work, but Angola provided me with an experience I'll not soon forget, and as anyone who's been reading along knows, a friend for life.

In about 36 hours I should be back at the Jersey Shore. It will be good to be home.