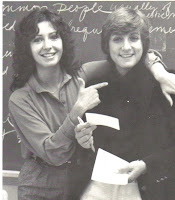 But how wonderful to know someone thought of me that way.
Tweet

Thank you for sharing. I have very fond memories of Tina as well and will miss her.

Thank you for reading, Carolyn. I am so sad, I had just gotten re-acquainted with Tina after 27 years and was looking forward to many years of friendship.

Sorry to hear of your loss Jeff. We all have had special people in our early days who gave us some sort of direction.

Jeff, Thanks for such a wonderful tribute. Tina is a dear friend of mine. She often spoke very highly of you. She very much enjoyed your publishings about 9/11/01, and recently told me how overwhelmed and flattered she was of your kind words about her at the WE Hall of Distinction banquet. Without question there was a soft spot in her heart for both you and your brother as well.

Tina served as an advisor and mentor to me while I wrote and edited for the Wessex Wire between 1997 and 2000. She not only helped me grow as a student, but also as a person. I would not be anywhere close to the writer I am today without her teaching and guidance. Even though at this time I am not pursuing a career in writing, despite graduating from the University of Maryland with a B.A. in Journalism, I consider writing to be my strongest strength and look forward to utilizing that talent during law school and when I become an attorney. As I am writing this I realize that it is impossible for me to express in words just how much she influenced me in all areas of my life at the time and ever since. She was a tremendously wonderful person who will be missed and never be forgotten. She left us all way too soon.

Thank you so much for sharing your memories of Ms. Lane. Similar to what you shared, Ms. Lane had a profound impact on my life. I am who I am today because of her. She pushed me to be the best I could be, and gave me confidence that I never knew existed. I was extremely saddened to hear of her passing.

Hi, Jeff.
My name is Elise and I write for Fair Lawn High School's newspaper. Ms. Tina Lane was our vice principle and we are writting an appreciation story on her. We would love for you to share some stories or thoughts through an interview on the phone. If you would like to do the interview you may email me at elisexoalex@gmail.com for further information. Thank you for your time.

Thanks for posting this.

I want to add mine to the chorus of voices speaking in praise of this remarkable teacher and person.

There is no doubt in my mind that I would not be who I am today--teaching literature at Boston University--without Ms. Lane. She was just so so special; what kind of teacher stays at school until 2 a.m. helping students put a school newspaper to bed? Only Ms. Lane.

Jeff:
I just heard the terrible news today. You have certainly kept your feet on the ground over the years. It is alway heart warming to see when students recognize teachers for having an impact not only on the student during their time in school, but in something they were sucessful in after school. It would be nice to chat sometime. Sorry it took this event for me to find you.
Adam Schnauffer

Tina Lane wasn't just a great teacher, she was an amazing advocate for the First Amendment and the importance of student voices. What a great loss.

I took Tina Lane's Creative Writing classes and journalism for three years. She was my favorite teacher and the best teacher I ever had. I'll never forget how every year she'd take us to Columbia University with her for a week to take writing classes. She was awesome in every way, and I feel truly blessed that I was her student.

I took Tina Lane's Creative Writing classes and journalism for three years. She was my favorite teacher and the best teacher I ever had. I'll never forget how every year she'd take us to Columbia University with her for a week to take writing classes. She was awesome in every way, and I feel truly blessed that I was her student.

Hi Jeff- I just came across your website via a present student of mine who knew that I knew Tina. I was a co worker of Tina's a West essex from 1999- 2002. We became friends, we became confidants, but more importantly she became a powerful mentor both professionally and personally.

I presently teach high school in Bergen County and I carry Tina with me daily. In my classes, I also use many of her mantras such as: "Maximize content, minimize words", "You will put your name on that?!" and my favorite, "Contractions are only for pregnant women."

On my desk there is plethora of pictures that I refer to as my "collection of favorites." These picture range from present to past students, friends, etc, but in the middle of these pictures sits a picture of Tina and me. My students often ask, "Is this your girlfriend/ wife?" My response is always, "No, just a dear friend of mine who has passed. I only wish I could be half the person she was." My students just look at me with curiosity. I then explain to him or her the "power of Tina."

I am sure she is looking down at us, smiling, hopefully knowing the profound influence she had on so many people. I am also sure in the dark days of our lives, she sends us the courage, the strength, the confidence and the power to move through our day.

Thank you for paying such a wonderful tribute to our friend. May we always remember "the power of Tina."

I am embarassed to say that I just found out today of Ms Lane's passing...she was an excellent teacher, friend, and better person. I echo all the sentiments stated here and then some...very sad to hear about this...