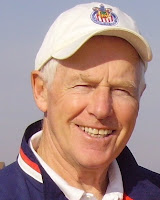 Talking to a fellow Little League dad the other day, I was asked "What kind of league did they have in your town?" He was wondering, in modern-day youth baseball-ese, if we played by Williamsport rules or something different, like Cal Ripken Baseball.

My response was, "That's a hard one to answer."

The truth is, I played in my dad's league. I guess you could call it the Jerry Bradley League, even though we called it the Essex Fells (N.J.) Farm League. If memory serves me correct, the league did not run, like Little League, through the age of 12. It ran through 11, or maybe it was just through fifth grade, or sixth grade. Really, the details about the rules are incredibly unclear. "We didn't have a rule book," my dad told me the other day, when I asked him. "Basically, the dads who had the time to get involved agreed to wing it and let common sense prevail."

That's not entirely true. I remember a few of the Jerry Bradley Rules for Farm League. For one, no pitcher was allowed to pitch more than three innings in a game. It was not as scientific as today's pitch count rules, which are age-specific, but my dad figured it was a pretty reliable way to save kids' arms. And that was something my dad felt deserved a "rule." I also remember that week night games were five innings, not six, to get kids home earlier on school nights.

It's funny looking back, because Essex Fells is an affluent town, but we did not have an official Little League field with fences and dugouts (much less a PA system, press box and electronic scoreboard). We had two diamonds that were situated on opposite ends of the what Fells residents now and forever will refer to as "The Field." When your team was batting, you sat on "The Hill." If you were thirsty, you went to "The Water Fountain." No, we didn't have a snack bar. For that matter, Essex Fells didn't even allow for the Good Humor man to sell ice cream. If you were lucky, you had a coach who'd take you to "Stop N Go" (in Caldwell, not EF) for a slurpee after the game. If you were super lucky, you'd travel West to Carvel for soft serve ice cream...then Carvel shut down and became a Toyota (or was it Datsun?) dealership.

We also did not have uniforms. We got T-shirts screen-printed courtesy of Mr. Beard and his Annin Flag Company and plain hats that my dad bought at East Orange Sporting Goods. We wore blue jeans (also known as dungarees) or even corduroys as our "game pants."

We did not hold a draft, but I do remember my dad in the living room with a legal pad filled with the names of all the kids, written in his very-legible (unchanged to this day) cursive. I remember having a day of "open play" and then I remember my dad sitting down at the kitchen table and trying to divide all the boys into what he liked to call "even teams."

The truth is, the teams were hardly even. I always played on the worst Farm League teams because if my dad was going to be the guy dividing up the kids, the easiest way to avoid "stacking" accusations was to make his son's team the worst. I believe we only played 10 games or so, maybe less, but I remember one year, I was on the Reds and we won one game. That was coming off my year on the Pirates, an "expansion" team that won...zero.

I remember the Pirates mostly because my dad, now 76, says his one regret from his Farm League coaching days was when he intentionally walked slugger Larry Fell in our final game of the season, because, as he recalls, "I just wanted you guys to win one game." He then quickly says, "I can't believe I did that...and I wish I hadn't." As you already know, we did not win. To that end, my dad believes he got what he deserved.

Before anyone thinks my dad's not a "baseball guy," let it be known that he was signed to play in the Chicago Cubs organization out of high school, only to have the Korean War interfere, but went on to play baseball (and football) at Upsala College, where he's now in their Hall of Fame. He doesn't know any of his stats, but will say of his Viking squads, "We were a small college that could go head to head with any of the big schools in the Northeast...Rutgers, Princeton, Yale." I've checked his yearbooks and Upsala not only played the big boys, they kicked their butts. The legendary, longtime coach at Rutgers, Fred Hill, was also a part of those Upsala teams.

My dad apparently just didn't see the need to push things too hard when we were 8, 9, 10, 11 years old. In fact, he didn't push too hard when we were 12 and 13, either. But, what he did do with the older kids was try to get them (at least those who wanted) ready for high school baseball. When work was done on the diamonds at "The Field," my dad asked if they could make one of the infields a little bigger. He moved the bases 10 feet farther down the line from Farm League distance (60 feet) and the pitcher's rubber back five feet (from 45 feet).

He called this "Intermediate Baseball" and he instituted things like leading, stealing and pitching from the stretch. Nowadays, it's called "50-70"...and it's a staple in American youth baseball. No, my dad didn't "market" it or copyright it, and for all he knew there were many other towns in America where kids were doing the same thing. For my dad, it was just common baseball sense.

In the Intermediate League, Essex Fells teams (the Firemen and Police) played against teams from neighboring North Caldwell. We actually got gray, wool-blend baseball pants at this point, to go with our T-shirts and hats. And, finally, my teams were able to compete and win games, mainly because of all the time my dad had spent pitching and hitting fungoes to me and my friends, the same guys who'd endured so many Farm League defeats.

Of course, it helped that I grew up across the street from The Field. When my dad would get home from work, he'd grab our bag of balls and go out and pitch to any kids who wanted swings. He also told other dads, if they wanted to use the balls, bats, helmets, just open up the garage and take what you need. I will always remember the sound of our garage door opening and closing, and knowing that meant someone wanted to play ball. And it was time to get my glove.

On Saturday mornings, all the Farm League kids would wear their T-shirts and hats from sun up 'til sun down...yeah, even those kids on the lowly Pirates. When the real games would end, games of unsupervised "lob ball" would begin. In lob ball, the pitcher's job was simply to lob the ball over the plate for the batter to crush. Believe it or not, many of us learned more about baseball playing in those lob ball games than in the "real" games. No coaches to fix our swings or tell us "two hands!" after we'd dropped a ball. No walks. Heck, no umpires.

You might guess what happened to most baseball players who came up in the Essex Fells "system." Yeah, not many amounted to much on the baseball field. The best athletes in town were typically tennis players and golfers at expensive private schools. We had some good soccer players, probably because soccer was such a suburban sport at the time. And we had some good ice hockey players because EF families could afford ice time at South Mountain Arena. (Old friend Tommy Russamano points out that Bo Sullivan's Essex Fells Falcons - and later - Bengals football teams produced good talent...Rusty Boyle even played for Penn State).

Yet somehow, there were my brothers, Rob and Scott, with no 200-foot fences to conquer, no trophies to earn, no All-Star spots to vie for, no Districts, Sectionals, no Williamsport, no Cal Ripken...just the Jerry Bradley League...And somehow, Rob earned four varsity letters on some of the best baseball teams West Essex High School ever put on the field, starting at shortstop as a freshman. And Scott...well, there's his baseball card over there (right). What kind of league did they have in my town?

I'll let you all decide.

Such a terrific article! This takes me back to the days at EF elementary. Really great tribute to a great guy. Man those were great days and you took me back there for a little while. Thanks Jeff.