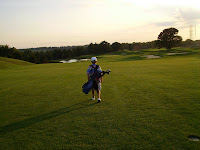 Of course, my friend Steve likes to remind me that we were playing the "magenta" tees. I don't care. My 74 was sent from above, I believe, because it was on a college-buddy golf trip that was supposed to be the 10th Anniversary of our first golf trip. But somewhere in the planning stage of that fabulous 10th Anniversary Trip our group became fractured.

There was a faction of fellas who decided we needed to go "big" and that meant Atlantis in the Bahamas. Now, I was not born yesterday and know that Atlantis in the Bahamas is not a "golf trip" destination. It's a casino. So, I revolted. And me and the guys on a more modest budget decided on Myrtle Beach, site of the first ever golf trip. And that was that.

Now, in nine years of golf trips, I'd always gone through the same ritual. A lot of practice, some new equipment, a new shirt or two, maybe new shoes. I always wanted to play my best.

And without fail, I'd play horribly. Of course, by the Back Nine of Day One, I did not care how I was playing. I was with my buddies and it was going to be 72 hours of fun, regardless of scores.

But in 1999, I had no time for any pre-trip preparation. No practice. No new driver. No new nothing. I basically threw my stuff in a suitcase, packed up the sticks, flew to Myrtle Beach, bolted over to Wild Wing and spiked a ball in the ground. And I shot 74. Afterward, I went to the bar and told my buddies, I was going to celebrate the greatest round of golf I'd ever play in my life. Understand, I'd never broken 80 before, so to shoot 74 was a pretty big deal.

For a second, I thought of trying to call the gang in the Bahamas to boast. But I thought better of it. I'm sure they'll have fun. But none of them are going to be able to say they shot 74. Ha!

It was a little while later when I touched base with the Atlantis Boys. Turns out they didn't even play golf. Didn't even take their clubs out of the travel bags. I was right. It was not a golf trip.

Nope, they'd spent all their time in the casino and on the beach. And I was justly rewarded by higher powers for my dedication to tradition and to the great game of golf. Right?

Well, I guess you could say that. Turns out, the guys in the Bahamas had a nice run of luck on the craps table. I think someone told me the low man in the group brought home about 2-grand. And did I mention they got comped the rest of the trip? And were offered free return visits.

I came to the game late, taking golf as a Phys Ed. class at UNC in 1986. Then, when I moved to Boston, I did not play for three years. I did not pick up the game, for real, until the fall of 1989, when I moved back to Jersey and started playing with my dad. I've been hooked ever since and still try to play as much with my dad as I can.

But the thing that means more to me than anything in golf is not my 74, nor the fact that I'm now covering my seventh Masters, it's that my 12-year old son Tyler and 10-year old son have taken it up at a young age. That means with me, Ty, Beau and Dad, we've got a foursome.

Tyler, who is 12, has already beaten me. I'd say he plays to about an 18-20 handicap and has played in a number of U.S. Kids Golf tournaments. If he continues to find time to play in between soccer and baseball games and practices, there's no doubt in my mind that one day he will be a single-digit handicap player, and perhaps even a scratch player. It's all up to him. (That photo above is from Akron, Ohio, where last summer Tyler got to play the Firestone 9 while we attended the World Golf Championships at Firestone Golf Club.)

Beau, 10, is going to have a big year in golf. I just know it. At the end of last summer, I could tell he was not only starting to strike the ball better, he was also beginning to like the game.

As for me, when I'm playing with my boys and my dad, it's like I almost don't even care about my game. I've broken 80 a few more times, but I'm pretty sure that 74 will stand the test of time.
Tweet