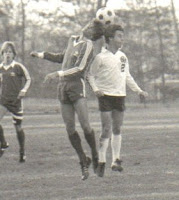 I started playing soccer in second, maybe it was third grade, but in fourth grade, I was somehow sucked-in by the sport of football. Maybe it was the barking of Coach Bo Sullivan, which I could hear loud and clear through my bedroom window. Maybe it was the cheerleaders and their "Be Aggressive, B-E Aggressive" cheer. Ah, who am I kidding.

It was the helmet and shoulder pads. It was the orange jerseys. So, I switched over to football in fourth grade, becoming a part of the storied Essex Fells Bengals program only to realize in, oh, a day or two, I did not like tackling. And I did not like being tackled. Nor did I like blocking, being blocked ... or any contact of any kind.

So, in fifth grade, after a year of watching Mr. Addis and most of my friends kicking the ball around as I held tackling dummies and tried to block guys three times my size, I went back to soccer. And I played through high school.

I'm not afraid to brag here. In grades 5-8 (especially 7th and 8th grade), I was a terror. Of course, let's temper it by saying, I was a terror in a league that consisted of four ultra- suburban towns and, for the most part, a bunch of "nice boys." Now that's out of the way, yeah, I tore it up.

I was also a better-than-average player at the freshman and JV levels in high school. A starter who rarely left the field and a guy who scored a few goals. Of course, the really good players at West Essex were playing varsity as sophomores (and some -- Mike Bellino and Torben Agesen -- as freshman). Nevertheless, the WE freshman team went 20-1 (shout out to Bobby McDermott and Chris Kubek!), and the JV squad went A Lot of Wins-and-1. I remember this because I've lived at the Shore for 16 years now and one of my buddies played on the Toms River North team that handed the WE freshman (78) and JV (79) its only two defeats, both in the Kearny Tournament.

(A quick aside. I did get the call-up to the Varsity as a freshman. The V was playing the legendary Kearny Kardinals (yes, that's the way they spell it) under the lights on a Saturday and the Essex County Tournament game with Columbia was going to be held the next day, so Coach Albanesius said, "Bradley, stay here..." And he played me in a varsity game, under the lights, in Kearny. If you've ever seen the Movie "One on One" with Robbie Benson, when he tries to practice on speed. Well, that's my memory of the Kearny game. The game was whirling around me for about five minutes. Then Coach Albanesius got me off the field.)

When it came time to really play varsity soccer at the end of my sophomore year, a time I like to call, "when the rubber met the road" I was...eh. I played a fair amount, gave it a decent effort, I guess. It is 100 percent fair to say I failed to live up to any expectations my brother Rob may have created during his four-year varsity career (something like a zillion goals), which included the 1973 State Championship.

We had a number of good players at West Essex, many of whom went on to play college soccer. I played with Mike Agesen (Virginia) and his brother Torben (Penn State). I played with the Commandatore Brothers, Anthony (St. Peter's) and Marc (Rutgers). Mike Bellino played for UMass. My best buddy, Dave Addis, played at Dartmouth and our goalkeeper Mark Stanisci played for Bucknell. And another one of my pals, the late John Salamone had a fantastic career at Oglethorpe University in Atlanta. All the good players had become pretty focused on soccer, playing for Mr. Agesen's Essex United team. I was still a muti-sport kid who spent his summers playing baseball while the soccer guys traveled to Denmark and stuff.

Still, I rode some pretty good coat tails, playing it safe for the most part. Trying to give up the ball in as few touches as possible, and trying to get in the way of the other team when that was in order. I could never juggle a ball a million times like the Agesens, or dribble through a world of defenders like the Commandatores. I could never, ever strike a clean ball like Addis. I was nowhere near as tough as Johnny Salamone.

My best memory is probably from my junior year, my one and only goal that year, a long, lucky, left footed shot that skipped past the goalkeeper (Parsippany Hills) on a rainy day. I was too in shock to celebrate, but as I jogged back to the center circle, Anthony Commandatore planted a big wet kiss on my cheek.

My soccer career ended in the fall of 1981 in a state tournament loss at Westfield High School. I'd pretty much started every game since the beginning of my junior year, but on the day of this state tournament replay (we'd tied Westfield the day before and the game was called in OT due to darkness), our coach Tom Taylor called me over before the game and said, "You're not going to start today." I said I understood because, truth be known, I'd been horrendous the day before. By the end of the game, I was choking back tears as my butt never left the bench and my team went on to lose on PKs.

And that was all she wrote. I hid my face in my jacket on the busride home, completely humiliated that I'd not seen a minute of action in my final high school game, and guilty as hell that I'd played so badly the day before that the coach lost two years worth of confidence in me. I was also sad because I thought we had a good enough team to win the state championship that year...and we were much better than Westfield.

But that was that...and all that was left was...

You should have started and taken a penalty. That was one of two penalty kicks (In a shoot-out) I missed over my soccer career! I missed along with Torben, and Bellino as well. By the way I think no one made a penalty. We did have a good team that year. We could have won it all or at least played Kearney in the final. I was the only underclassmen starter. We had great games that year. We beat Harrison 6-0 under the lights that year. That Year marked the last time West Essex would play with the big boys in Group IV. Commando

Growing up in nearby Verona, this brings back a lot of great memories as we were always playing against the West Essex kids (and later with). Although Verona High did beat you in '81. McSpiritt

Jeff...we were schoolmates back in the day; found this article after a random Googling of Torben Agesen in search of some old Gould School classmates.

I was at WE for just a year ('76-'77) before we moved out of No. Caldwell. But great to find you out here; I've probably read you a hundred times without putting two and two together.