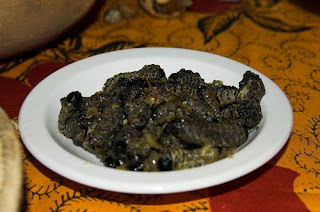 Not sure if was a touch of boredom -- not a lot happening the last three days -- or just that I was trying to be a nice guest here in South Africa, but this afternoon, I ate a worm.

To be more exact, I ate a Mopane (Mo Pah Nee) Caterpillar (worm, I dunno). It was fried, I guess, and covered in some kind of red sauce. It was crunchy, chewy, gamy, nasty. I thought it would be rude not to try it when our driver Jan ordered it up for the table, but after me and my two colleagues each choked one worm down, we noticed Jan wasn't exactly digging in. "No, I don't like it," Jan said with a smirk. "But a lot of people do!" With that, Jan chomped one down, then handed the rest of the order over to the folks at the next table. They left the dish alone.

Again, not a lot going on the last few days here. Work and hotel meals. The restaurant serving the Mopane was in downtown Johannesburg, and music filled the air and local artists and craftspeople were selling their stuff. It was a pleasant lunch break, all in all...except the worm.

And then it was back to work in Mission Control. It's been good to catch my breath here after traveling around the country for the better part of a week, but working in the International Broadcast Center is kind of a drag. I do get to go to a game tomorrow. Not "that" game.

I'm going to write in the next few days about the amazing side trip my nieces, Kerry and Ryan, took to Kenya to see their little sister Beatrice, a young lady they've been sponsoring for the past year for an organization called Oasis for Orphans.

Kerry has promised me photos of "Little Bee" but in the meantime, check out this video from Christmas 2009, where Beatrice introduced herself to my brother's family. If you enjoy that one, here's another taken a year ago where a soccer field was dedicated.
Tweet