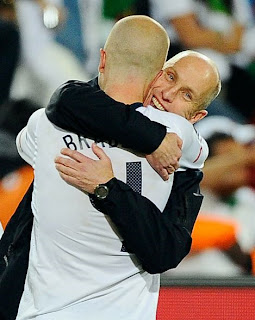 There's no way I could be any more distracted.

Trying to stay focused on what I'm supposed to be doing here while something else is going on that not only has my stomach churning but also has a good part of the USA's stomachs churning...not easy. As my old friend Bruce Springsteen sings, "Some day we'll look back on this and it will all seem funny." But for now, not much funny about it.

I want to write a little bit today about the emotions I've been feeling, mostly the overwhelming pride that literally brings me to tears once or twice a day (no lie). But I don't think everyone gets it. Some do. Many don't.

Something happened on Wednesday that took 12 seconds and it totally changed the perception that Americans would've taken away from this event. In 12 seconds, Americans went from a bit angry and very frustrated to, quite simply, overjoyed. But if those 12 seconds had not happened, while I'd have been sad, my pride would not have been altered even a little bit.

It's said often that it's not the results that really matter, but the journey. I've witnessed a four-year journey from close range. I know the sacrifices that have been made, the hard work that's gone into it. I'm pretty close to a couple of incredibly dedicated guys.

My pride was intact, regardless.

In my line of work, I'm often asked to analyze, to critique, to break things down. But in this case, I refuse to do it, and I am trying my best to tune it all out. It's not easy, but I'm doing my best.

I know not all my friends can get on board this train, where it's all about love and hope, where there's no room for criticism. I don't expect everyone to jump on.

Just understand it's the ride I'm taking. The journey.
Tweet

there is no road to happiness, happiness is the road - Buddha

In my mind, these boys can do no wrong. This has been a fantastic journey. I'm not thinking about what happens when it ends. I'm just glad it started and that my son gets to be there with me.

As I stated prior to the 1sdt ball being kicked. This team have already won in my book. Rob and Team USA thanks for making it a little extra special