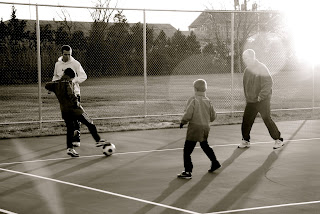 These were the words spoken to me by an old friend who works with my brother. I wasn't sure if I had the toughness to go sit in the stands today, but these words got to me.

So, I'm going to take a two-hour ride in a van with a bunch of my colleagues who are going to work. And I'm going to watch. I stand by what I wrote yesterday. I'm admittedly biased. Whatever happens today, my pride is intact. I'm in complete awe just being here.

I'll go back to being a know-it-all eventually, but for now I'm a know-nothing, completely blind to what's going on. Blinded by love and admiration. Nothing can change that.

The photo above was taken by my niece Kerry on Christmas Day, 2008. It's Rob and Michael playing ball with my two sons. This photo is in my office and is one of my prized possessions. What's funny is that I'm way more in awe of Rob and Michael than my two boys are. I remember that day so well, because the four of them returned from the park drenched in sweat.

To Tyler and Beau, they're just Uncle Rob and Michael, and when they're playing ball together, they might as well be some kids in the park. There's a purity in that I can't really describe. If my boys were here, they'd have no problem sitting in the stands today. They wouldn't consider it some act of bravery. They'd just be wanting to go to the game, and probably wishing they could go on the field at halftime and kick the ball around. I'll try to keep that in my heart today.
Tweet

Get used to this feeling of pride and helplessness. With luck, you'll experience it many times. And, I'm not just talking about the rest of this tournament.

What do you think you will feel will your boys enter their first HS championship game? I don't mean to trivialize the world stage. I just imagine that the feelings of pride and helplessness will be comparable.