I had no plans to attend another Bruce Springsteen concert. I've been to approximately 93 shows since 1980 and several years ago decided that unless someone (like my friend Denis) offered me the chance to see something unique (Bruce solo acoustic at the Paramount in Asbury Park in a benefit show for victims of Hurricane Katrina, thanks Denis), I'd call it a career.

And then last year I thought to myself...Bruce is about to turn 60 and cannot possibly be touring many more times, so I really owe it to my sons (then 12 and 9) to get them to a show. So, I forked over $100-plus for tickets and took them to Giants Stadium last July and got to see Bruce and Patti Scialfa bring their kids on stage for Twist and Shout and, well, it was pretty nostalgic. Me and my kids watching Bruce and his kids...all of us belting out the words and shaking our asses.

Glad I did it. But I figured that was probably it.

Until last week, when the lure of hearing all the songs from my favorite Springsteen album, Darkness on the Edge of Town, drew me back to Giants Stadium. I forked over $170 for a pair of tickets with a face value of $100 (below face value, a sign of the times) then started emailing some of my oldest, hardcore Bruce fans to see if they'd join me for an evening of Darkness.

The regrets were legit for the most part. Business meetings, youth sports practices, tickets to later shows, whatever. Still, I started to feel very 45 as one polite "no thanks" turned into 20. Finally, an old friend got back to me with a positive response. I had a running mate for the show.

There was, of course, a tailgate party. A tame one, to say the least, with another friend and his wife and their two kids, both under the age of six. I had as many burgers (two) as beers. Even with only two brews in me, it seemed like I had to make about a half-dozen trips to the port-o-potty. Another sign of the times. And around 8 p.m., it was time to head in for the show.

And as I stood on the floor of Giants Stadium, giving myself enough elbow room so I wouldn't have to worry about bumping into anyone, I just watched. I sang a bit, not like the old days when I'd leave a Bruce concert drenched in sweat, with no voice remaining. The early part of the concert was perfectly fine, but it didn't take long before I was glancing at my watch, wondering when he'd start the Darkness part of the show. Looking around at the crowd, looking pretty much as young, if not a bit younger, than most of the crowd, I wasn't sure if I should laugh or cry. There was a dude with a hairpiece in front of me dancing like it was 1984. I laughed.

The whole experience made me think about my first Bruce show, which I attended with my brother Bob back in 1980 at Madison Square Garden. I remember that show as an "out-of-body" experience. I was simply mesmerized by Springsteen for, I swear, over four hours. I was quietly thinking to myself that two hours, on this night in 2009, would be plenty. The experience was very much "in-body." Bruce's energy, while impressive for a dude who's 60, is really nothing like it was when he was in his early 30s (hard to fault him there). When I watch old youtube clips, particularly those from 1978-81 shows, I am still blown away by his raw passion. The passion is still there, for sure, but it's different. I'm different, too, so I am understanding.

But then, for nine minutes, I was transformed. At the risk of sounding like an old fool, when piano player Roy Bittan broke into Racing in the Street, I was once again 16 and standing in the Garden. It's never been Racing's lyrics that get to me, but rather Bittan's piano-playing. As Bruce finished the songs lyrics, "For all the shutdown strangers and hot-rod angels rumbling through this Promised Land, tonight my baby and me, we're gonna ride to the sea and wash these sins off our hands...Tonight, tonight..." I felt the lump in my throat growing. I closed my eyes and listened to Bittan play, extending the song some four minutes. It was just so...great to be there.
Tweet
Posted by Jeff Bradley at 9:08 AM No comments: 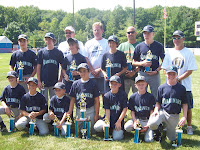 * A U-14 soccer game where a team, depleted by injuries, down to 10 men, was forced to play, even when one coach asked the other ahead of time if they could re-schedule. "No," the coach responded. "Show up and play with 10, or forfeit." Think that coach asked his players, A. How they would feel about a forfeit, or even, B. How they felt about playing a depleted team? My guess is that the kids would've voted for playing against a full-team. Maybe I'm wrong. Doubt it.
Tweet
Posted by Jeff Bradley at 9:22 AM No comments: