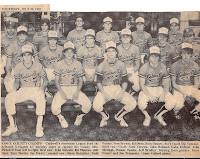 The following entry will be all over the place. I apologize ahead of time.

Yesterday, I lost a dear old friend when U.S. Army Colonel John McHugh was killed by a roadside bomb in Afghanistan. I had known John since I was about eight years old.

We lived in different towns but always crossed paths in sports. Always.

From Church Basketball (he played for St. Al's, I played for Caldwell Presbyterian) to soccer camp in the summer, to watching our older brothers play American Legion baseball together, to the day when he and I learned as freshman we had made the Legion team. We warmed the bench together and loved every minute of being a part of the Post 185 squad. A year later, in 1980, we both got our chance to play...two years later, we were part of a team that won the Essex County championship and came within a game of winning the state title. As seniors, we won another county title, but John missed out on the post-season as he had to report to West Point to begin his life as a cadet. Without John as our backstop, our team was not the same. 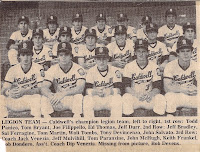 He was a catcher in baseball...a goalkeeper in soccer. He was a born leader.

John went on to play goalkeeper at West Point. He loved soccer with all his heart. He was a great goalkeeper because he was a student of the position. Always in position, head always in the game.

In fact, he recently went to US Goalkeeper Training School...I saw this on Facebook.

"I got schooled this weekend by the Director of Coaching for the NY Red Bulls youth team; however, I recovered in time to knock the ball out for a corner before it crossed the line. of course, I also pulled a muscle; maybe it's because he's about 20 years younger and much better than me. But will I ever learn? Of course not, just keep playing."

Growing up, John was always one of those kids looking to organize a game, be it soccer, basketball or baseball. He (like myself) was a field rat. In high school, he not only was the goalkeeper on a team that went to the state finals and a catcher on a team that won the Greater Newark Tounament (a big deal in NJ), but wrote the game stories for the Caldwell Progress. Seriously, I thought he'd one day become the mayor of Caldwell. He was loved by everyone because he was so good-natured, friendly and honest. He was one of those guys who never had an off day. Always had a smile.

John graduated from West Point in 1986 and served his country for the next 24 years, most recently at Fort Leavenworth in Kansas. He still found time to coach soccer teams in Kansas. He was really looking forward to watching the World Cup. He wrote me recently asking if I needed someone to carry my bags in South Africa. He was a huge fan of the US team and my brother Bob. John had two older brothers, Jim and Frank, who crossed paths in a similar way with my older brothers.

Different towns...same upbringing. Clean-cut boys, like me and my brothers. Parents that wouldn't let them get out of line. Like my parents.

On May 15th, John wrote on Facebook. "On the road again tomorrow. Heading to Afghanistan for a couple of weeks. If my travel doesn't get whacky I should be back in time for the Indy 500." The next day, John wrote: "Be careful for nothing; but in everything by prayer and supplication with thanksgiving let your requests be known unto God. And the peace of God, which passeth all understanding, shall keep your hearts and minds through Christ Jesus. Phillipians 4:6-7."

Three days later, he was killed.

John leaves behind his wife Connie and five children, three daughters and two sons. He recently became a grandfather at 46. It had been 25 years since I'd spoken to John and I'm thankful that he and I had gotten back in touch. We'd talked about having a 30-year reunion for our 1981 Legion team. I was counting on him to put it together.

He would've been our leader.

Rest in Peace, John. I'll never forget you, my friend.
Tweet
Posted by Jeff Bradley at 10:37 AM 86 comments: