So, as I wrote yesterday, my brother Scott became a regular attendee at Dean Smith’s practices in the early 90s. Since I worked in the Sports Information Office, I’d been privy to a few practices, and was keenly aware of Coach Smith’s meticulously choreographed sessions. I’d told Scott and he wanted to see for himself because, as he says, “There’s a connection between all sports.” What he witnessed was down-to-the-minute schedules, where student managers ran the clock, where balls were racked and quickly positioned for the next drill. The horn would sound, instructions were relayed, and it was on to the next thing. Statistics were kept in practice. Not so much points, but things like charges drawn, loose balls recovered, successful box-outs, as well as fundamental errors. My brother hasn’t taken it to that extreme in baseball, but I know he’s tried to make efficiency one of his coaching hallmarks.
Tweet
Posted by Jeff Bradley at 9:20 PM 29 comments:

The end of pro baseball was nearing for my brother Scott, so he decided he was going back to Chapel Hill to get his degree. He wrote a letter to Dean Smith. Paraphrasing, Scott wrote: “I played baseball at UNC and I’ve played pro ball for the last 10-11 years. I’m coming back to graduate and I want to be a coach someday. Can I come to watch some of your practices?” Carolina practices were closed to the public. Scott quickly got a letter back from Coach Smith, telling him, “I remember you and followed your career. Your name is going on a list. Come anytime.” Scott became a regular attendee. Years later Scott became the coach at Princeton. He never told Coach Smith, but one day there was a knock on his office door. The Heels were playing at Jadwin that night. Coach Smith was there, just checking in.
Tweet
Posted by Jeff Bradley at 11:29 AM 8 comments: 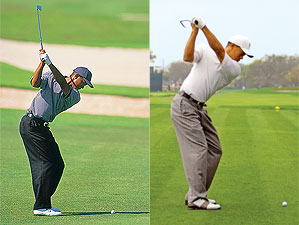 When I covered the Yankees from 1992-95, captain Don Mattingly refused to talk about his swing. He’d talk about anything else. But ask him, when he was going good or bad, to discuss his swing and he’d say, “I’m not going to talk about that.” Privately, he once said to me, “I’ve learned that it doesn’t do me any good.” I understood, which is why I think Tiger Woods now has to follow the lead of Donnie Baseball and stop talking about his swing. Ever since he started losing his grip on the game, it’s been one take after another on what he’s tweaking, why he’s changing, etc. Stop talking about your swing, Tiger. Better yet, stop focusing on your swing and focus only on the numbers you’re putting up. Get back to grinding, competing, scoring. And for God’s sake, stop telling everyone you’re close! The score’s all that matters.
Tweet
Posted by Jeff Bradley at 3:06 PM 13 comments: