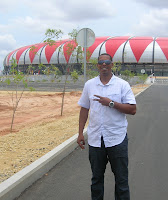 Meet my "Fixer." His name is Ricardo.

"I would like you to see that the people of Angola are beautiful and peaceful," Ricardo says. "Because this what I believe in my heart."

It is Ricardo's job to make sure I get where I need to go, which is no easy task here, because of the choking traffic and less-than-adequate roads. Today I had two tasks to accomplish. I had to get my media credentials and I wanted to register myself as a visitor to Angola at the American Embassy, just in case...well, ya know.

We left the lovely Hotel Rouxinol around 9:30 after a satisfying breakfast of toast and toast. Six hours later, I was back at the "Roux" having procured my credentials and taken Ricardo (the Fixer) and Mauro (the Driver) to lunch.

I believe we drove about 10 miles total.

Ricardo apologized profusely for the traffic (as if there was something he should have been able to do about it), explaining, "This is the way it is here, Monday through Friday. You can see the people are busy. The people are working." When a policeman stops our car at a traffic circle and asks to see Mauro's license, Ricardo does not want to hear Mauro express any anger or frustration. "He is doing his job," Ricardo says. "He is only doing what he's told to do."

As we putter along, Ricardo tells me that he was once a champion in Karate, beginning at the age of 5 or 6, but when he reached the age when he would truly begin to compete, he was called into a different kind of fighting. The Angolan Civil War ended only eight short years ago and Ricardo says that he and many other young boys were running the same streets we now drive, "We had no shoes and no shirts," he says. "But we had AK-47s. You had to learn to fight or you would become dust."

Ricardo's father died in the war when Ricardo was only three months old. He had many other relatives who also died in a war that ran from 1975-2002 and killed half a million people. "What's especially sad," he says, "is we were fighting our brothers."

Ricardo moved to South Africa for a while, met his wife and had two children, and now he's back, "Because I want to see this country, my country, to succeed." He looks outside the window and says, "Ten years ago, this was all sand. It's getting better."

I look out and see poverty as extreme as anything I've ever seen in person. Shanty villages and mountains of trash. Kids wallowing in mud. Pregnant women carrying bushels of bananas to sell on the streets. I guess perspective is an amazing thing.

When we stop for lunch of rice and beans, Ricardo tells me, "Try a Cuca, it's our national beer." He then adds, "Of course, The Driver and I cannot have one."

I take a pass and tell him to order three Cokes. "Are you sure, Mr. Jeff?" Ricardo says. "I am here to make sure you are doing everything you want and need to do."

As you can see, my Fixer is doing a great job...and before this trip is over, I am going to insist that we have that Cuca together.
Tweet