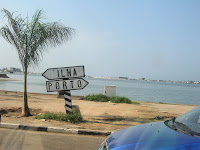 Probably my least-interesting day so far.

Talk about a sentence to suck the reader in, eh? Honestly, it was a work day not so different from an off-day on any American sports beat. There was a hotel lobby. There were journalists waiting for some time with players. There were PR guys calling the shots. Didn't matter if it was Luanda, Angola or Kansas City, Mo.

When that drill was done, I asked Ricardo if he could find us a decent place to watch the quarterfinal match between Cameroon and Egypt, so we took the road-less-traveled...literally, the road with less traffic...to the part of town known as Ilha.

Ilha looks quite like so many coastal places I've been before, in some ways. In other ways, it's like nothing I've ever seen before in my life (except for maybe Asbury Park eight years ago). You've got wide beaches bordering next to shanty villages filled with trash and stray dogs. You've got a few night spots that look nice. One is called Chill-Out Luanda, though Ricardo pronounces it "Sheelout" and he warned that it's pricey, which is saying something here in Luanda, which I've learned is the most expesnive city in the world. Seriously, you will get raked in this place if you're not careful.

"If you would like, I will take you there one night, Mr. Jeff," Ricardo said. "But these places, I don't like them too much." Without going into much detail, Ricardo explained that in these places his job becomes very difficult. I think he had visions of me drinking a bunch and dancing. Go ahead, I'm laughing too.

We watched the game at an outdoor cafe called Ponto de Final and I enjoyed a couple of cold Cucas, which I must say is a pretty nice beer. I let Ricardo order for me and he ordered me a piece of beef covered with a fried egg, french fries, a salad, and he also ordered up some rice and beans because he's heard me say I like them. Understand, Ricardo had a secret plan to pick up the check, but I would not let it happen. Because I had described a piece of meat I'd eaten at my hotel as "shoe leather," Ricardo asked me, "Is this meat soft enough for you, Mr. Jeff?" Indeed, it was soft enough.

Ricardo watched me like a hawk as I took some photos of local scenery, including a filthy flea market that bordered some woods that Ricardo described with one word. "Drugs." Still, my spirits were lifted by the youngsters on the beach, playing pickup soccer and doing things I did as a kid, before XBox and PS3. They played leap frog. They played tag. I saw a little girl just spinning around, making herself dizzy. She had a beautiful smile. "You love children, Mr. Jeff," Ricardo said. "I can see that."

I told him he was right. And I could tell Ricardo was sad. He misses his daughter, Lolly and his son Tony, who are back in South Africa with his wife Rita. He has explained that he is here because he thinks in Angola he has more opportunity to provide for them. "As you can see, Mr. Jeff," he says. "Money is spent in Angola."

It's got a chance to get a bit tedious here the next few days. Training sessions and waiting on players who don't want to be interviewed. I told Ricardo I might just drink 10 Cucas and do the "Kuduru" for him. He laughed hard.

"I'm going to miss you very much, Mr. Jeff," he said. I think he knows how I feel.
Tweet

Me, too!! Reading every day...what it must be like to be there...an experience, to say the least? Sounds like it'll be a meaningful memory...SZ

I've gotten where I check FB constantly just to see if your next blog is up.

Nice work Jeff...have been reading since day one. Keep up the good work.