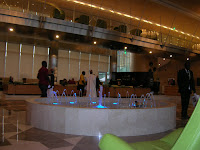 A weird day, for sure. A day of mixed emotions.

It was a day spent with the muckity-mucks of FIFA and CAF (Confederation of African Football) at the official CAF Hotel. Ricardo and I got lost on our way out there, stopping for directions a few times, before ultimately finding it.

"I was here when I was younger," Ricardo said. "I fought here in the war, but it was nothing but bushes and sand." When we finally found the hotel and convention center, I wasn't sure what to think. It was brand new and gorgeous. Some officials from FIFA and CAF were emerging from the fitness center in their green adidas gear. Others were having coffee and breakfast in the swanky cafe. 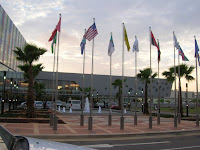 Outside there were freshly planted palm trees, valets, fountains. The lobby was nothing short of spectacular, with marble floors, crystal chandeliers, more fountains. For a while, as I sat waiting for the press conferences and interviews to begin, I thought, "How much easier this trip would've been had I gotten a room out here." I mean, I could've eaten in the cafe, had drinks at the bar, worked out in the gym...

But as the day wore on, as each packet of information was handed over, one glossier than the next (one was Qatar's 1022 World Cup bid propaganda), I started to realize, if I'd stayed in this hotel, I'd have missed out on all the long trips in the truck. It took us forever to get out there this morning, and the trip home was no picnic either. And it has been on those trips, I think, that I've learned about Angola. Two hours after I told Ricardo I was ready to be taken home, he and "Boy" (aka Payzin) showed up in the truck, ready to begin the trek back to the Roux.

"We call Friday, 'the Man's Day,'" Ricardo said as we crawled through a the mass of traffic. "You can see all the men are out together, having some drinks." Ricardo was right again. The streets were lined with men. In the earlier hours, men were doing pull-ups, sit-ups and push-ups in one of the "fitness parks." As night fell, yeah, they were drinking beer from the bottle. Toasting the start of the weekend. 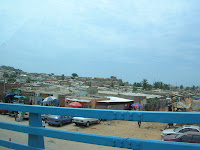 I had not eaten all day, not wanting to sneak into the fancy luncheon (I think I saw lobster) that Qatar was throwing for all the delegates. I asked if we could return to "Sindicato," where we've eaten rice and beans. "Of course, whatever Mr. Jeff wants to do," Ricardo said. So Ricardo, Payzin and I sat down to dinner together.

"The Man's Day," I said to Ricardo and Payzin, raising my Cuca.