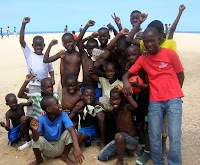 It was day of joy and sadness...and ultimately, hope.

We began the morning in search of football and it was easy to find. Maybe 100 yards outside the gate of "The Roux," around 10 a.m., a group of men were playing a pickup game on a patch of asphalt that was sprinkled with sand, pebbles and glass. 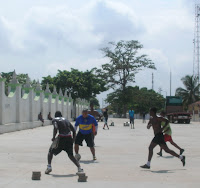 It hardly mattered as they flicked around a half-deflated "bola" as one of the goalkeepers, muscles glistening with sweat, barked out instructions. I knew this would be the case coming into Angola, having traveled to places like Guatemala, Mexico and Brazil. A ball can do wonders.

As we drove around the streets of Luanda, you couldn't travel far without seeing a ball. A boy dribbling along the sidewalk in his flip-flops. A street vendor selling replica game balls emblazoned with the logo of the African Cup of Nations. (The streets are already on fire for tomorrow's clash between Angola and Ghana, a quarterfinal that will bring this country to a 90-minute-plus-stoppage-time halt). And a group of young boys playing on the beaches known as "Ilha."

Caked in sweat and sand, but full of pure joy as they played their games, with no parents around to tell them to "spread out!" or "shoot!" No, it was their game and their game only.

The tallest boy in the group came over and showed me a notebook he was keeping. He explained that this was his "league," and the teams, though not uniformed, were all named. A.C. Milan, Manchester United, Real Madrid and Chelsea were some of the names I was able to read. He said the boys all contributed money, and the winners of the league would take home the kitty. I was impressed, even if it was only his dream. 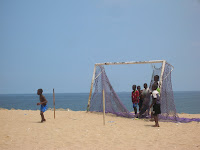 As we drove away from the beach, I told Ricardo I might want to buy an Angola shirt and he told me, "We shall see, Mr. Jeff." About an hour later, after we'd driven by dozens of shirt vendors on the street, Ricardo asked if I could wait a moment while he went into his apartment. When he came out, he handed me a shirt. His shirt. "This is a gift from the heart," Ricardo said. When I said it was unnecessary, he said, "I'm honored you want to wear the shirt of my country." When Ricardo told me to wear it to the game tomorrow, I didn't have the heart to tell him that would be inappropriate for a journalist to wear a jersey (though many Angolan writers will surely be wearing their country's colors tomorrow), I think I will wear it tonight when we go out to eat. 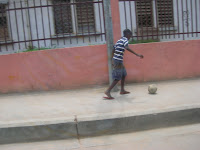 Ricardo has been my greatest gift on this trip. A true friend. Over lunch, I learned that he recently lost his mother, who died at the age of 49. Ricardo says it was the stress of the war that killed her. Stress of the war that took her husband over 30 years ago. The war that had Ricardo fighting in the streets as a young man. "She was forced to be my mother and my father," he says as we eat big plates of rice and beans. "It's very hard now for me without her."

I am happy that Ricardo likes to talk, to tell stories, because it keeps me from getting too lonely. He does ask, however, that most of what he's telling me remain between the two of us. There's still not a lot of trust here, for sure, even though the country has been at peace for eight years.

I will say that I've never met a 33-year old man in my life who has been through so much. Who has every reason to be bitter and angry. But who repeatedly says to me, "I believe, Mr. Jeff, that if I work hard and live an honest life, good things will happen. This is what I want to pass on to my son and daughter. That an honest man can go far."

Tomorrow is game day. I came here hoping to see Ghana and Ivory Coast advance. But it will be hard now not to root for Ricardo's country. Forca Angola!
Tweet

Very touching, and it seems you have made a good friend!