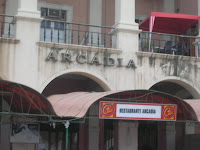 Guess it's time for me to send home a dose of reality.

And the reality is, this is a tough place.

I've traveled to many countries in my 20 years as a journalist, but this is the first time I've ever been in a city for this long and cannot tell you even where I am staying. Each time I come back from any part of Luanda, the return trip is like putting a 1,000-piece puzzle back together. I could be a block away and I couldn't tell you where I was in this town of narrow, dirt and mud roads, crumbling cement and incomplete construction projects. 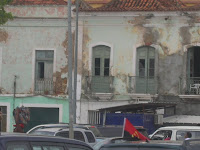 I've focused on the people throughout this trip, in particular my friend Ricardo, because I've tried to look for the good while I"m here. I'm not giving that up, but I don't want to paint a completely inaccurate picture of where I am.

When I mentioned to some South African businessmen who are staying in my hotel that it doesn't look like the city has recovered well from the 28-year war, one looked at me and said, "Twenty-eight years was just the civil war. More wars preceded that."

It shows. Any beauty in the old architecture here has been covered with dust. There are piles of concrete at the feet of nearly every building. And in the day to day hustle and bustle that defines this place, it seems there's no time left for clean up. Garbage bins overflow. While there is certainly some wealth in Luanda due to the oil business, the overwhelming majority of people are poor. Very poor. I've read that 60 percent of the people here live on two dollars a day. You see a lot of desperation. 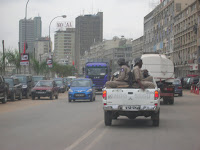 Today, Ricardo even showed frustration with the city he grew up in, as he got stuck in yet another traffic jam, got cut off by yet another car or scooter. "When will people start to follow the rules?" he asked. "It is chaos. I am embarrassed."

He said he had a long talk with his wife last night. She is South African and they've spent their entire married life together in Johannesburg. "I told her I feel very bad for Mr. Jeff," Ricardo said. "I feel very bad for this man who is trying to work."

Of course, I told him it's not his fault, but I am reaching a frustration point because I am not used to being able to accomplish so little in the course of a day. The streets are choked with vehicles and pedestrians and riders on scooters. I could walk more perhaps, but Ricardo would not hold up in the heat. And that's not what he was paid to do. Go out on my own? I have thought about it, but not a single person here has given me an inkling that I could negotiate this city on my own safely.

"I'd just like to have a place where I could walk for coffee," I told Ricardo today. He just shook his head and said, "I am very sorry, Mr. Jeff. There is not that place."

And with that, Ricardo slammed his hand down on his thigh. A man was tapping on his window, trying to sell us DVDs. Decaying, dilapidated buildings surrounded us.

I drew a deep breath.

I did not know what else to say. Tomorrow is a new day. Five more to go.
Tweet

I've lived here for 3 1/2 years. You've captured the essence of the place!