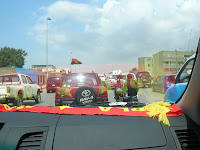 A long day for me and Ricardo.

I could moan and groan about the traffic here in Luanda. It's like nothing I've ever seen before in my life. But it's here and it's not going away, so we'll deal with it.

I'd rather focus on other things.

The people of this country continue to amaze me. I look around and see so many depressing things these folks could harbor and turn into sadness, but instead today, they decked themselves out, from head to toe, in their country's colors and sang and danced and tried to will their team to victory. 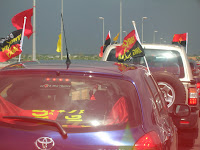 Every car, every building was seemingly bedecked with a flag. "If Angola wins," Ricardo said as we stood still in our Toyota pickup on a dusty road that led to El Estadio 11 de Novembre, "tomorrow nobody works." He thought for a second and said, "Of course, Mr. Jeff, I will work."

For a second, he was worried that I might be angry with him. If he only knew.

Silly things have made me smile on this trip. Every morning, I eat toast in the lobby/lounge (there's no bar, so it's hardly a lounge) area of the hotel. And every morning, a five-song John Denver CD plays over and over and over. For some reason, I think Farah and Fuad, the hotel owners, think I enjoy it..."Follow me, where I go..." 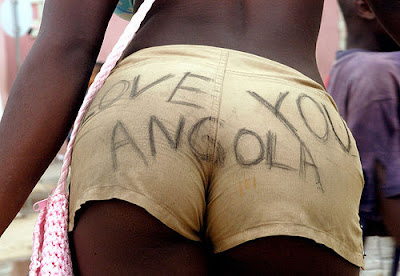 Every time I get into Ricardo's truck, he has the same four or five songs blasting. He explained to me that the music is for the "kuduru," which he translated as the "hard ass" dance (that's not my photo, it's google's). It's a cultural thing, for sure, because to me it sounds like the CD is skipping. At any rate, I pump my head up and down to the beat, tap the dashboard, and it makes my man Ricardo laugh. And that's cool. 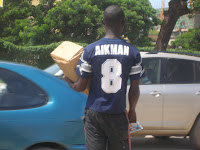 I'm repeatedly amused by the array of American sports jerseys that seemingly have no real significance. A Mike Singletary Bears shirt. A St. Joseph's hoops jersey. A Vanderbilt T-shirt. A Troy Aikman jersey. A Dodgers Little League shirt from some American town, with the name of some local sponsor on the back. I'm guessing the folks who throw these items in the Salvation Army and Goodwill bins in their hometowns can be happy they're being put to use.

Ricardo was sad on the long trip home, but I'm happy for one thing, he went inside the new stadium (his first time) and watched the game with his countrymen. He had not planned on attending the game because he did not think it was the professional thing to do. After I told him I'd be angry if he did not go on account of me, he changed his mind, found some kids with extra tickets in the parking lot and was able to be a fan.
Tweet