Controversial (by my standards) Training Aid 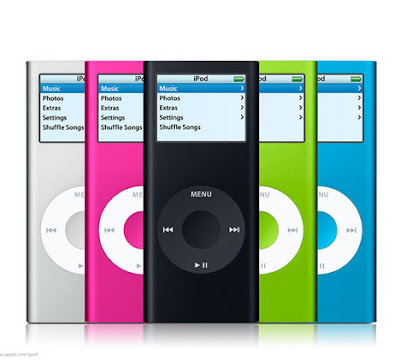 I'm not sure if you'd call it a concession, but I do.

There's a "new" device attached to my body during my marathon-training runs. It's called an ipod. You're probably wondering what the hell I'm talking about, but here's my deal. I've always laughed at "headphone runners" the same way I laughed at runners with bike shorts, fanny packs and tank tops (unless you're actually competive). Not only did I laugh at runners who wore headphones, I refused to let them beat me. The sight of a runner ahead of me who was chilling to tunes made me run harder. There was no way I was going to let "that guy" beat me.

Well, I guess we can file this under "if you can't beat them, join them." I did not load up with all the ipod gear that runners seem to tote around these days. You know, the arm band thing, the special head phones. I hide the ipod either in the pockets in my shorts or my sweatshirt. I stuff the wire in somewhere around my neck and feed it down my body. On cold days like today, you can barely notice wires to the ear buds because they're tucked under my ski hat. As you can tell, there's still something that bugs me about becoming one of "those guys."

One thing I noticed on a slow eight-miler today is that when you run with headphones, during the breaks betweeen songs, your breathing sounds incredibly loud, like the breathing in a horror movie (was it Halloween? I freaking hate horror movies, I dunno). I think the fact that I'm slogging along right now at such a ridiculously slow pace makes the whole practice so boring that I feel the need for a soundtrack. I made a 45-minute playlist the other day that opened with "The Harder they Come" buy Jimmy Cliff and the Little Steven song "I am a Patriot" by Jackson Browne and finished up with "Fort Hood" by Mike Doughty (if you don't know it, you gotta check it out) and "Hey Mockingbird" by an old Chapel Hill bar band named Dillon Fence. In between, I had some Dropkick Murphys, Coldplay, Teenage Fanclub, Van Morrison and Blink 182, along with some other stuff that you've never heard before (unless you're Bob Ferguson).

Today, however, I just hit "shuffle" and let it rip. I vaguely remember Trashcan Sinatras, Ben Kweller, a little Jackson Browne solo acoustic, which was followed by, of all things, Eminem.

I still do not like the concept, but I am going to give it a few more tries before I decide whether to wire up for runs or not. I will not, however, race with headphones. That's crossing the line.

And, by the way, since I was dissing Oprah and Puff Daddy the other day, I figured I'd check out their times and came across this list of 25 Celebrities Who've Run Marathons and am proud to announce that the only celeb who beat my PR was Billy Baldwin. And let me just say thank God I beat (barely) cheezball former VP candidate John Edwards and his $200 haircut.
Tweet