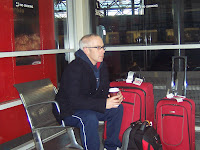 The sun finally broke through the clouds here in England. Oh, it’s gone again. Seriously, it was that quick. We’re back to gray, damp and cloudy.Little matter as I’m back on a train bound for Leeds. Then, after a change, it’s on to Hull. Before I go on a rant, I want to thank the train attendant (is that what they’re called?) who looked at my ticket and asked, “Where are you going to change?” I said, “Manchester Picadilly,” to which he shook his head and said, “If you get off at Picadilly Station with all that luggage, you’re going to have to pull it all the way to the other side of a large train station. If you stay on this train ‘til Leeds, you just walk across the platform.”

Thanks, mate. You just earned points for your country, tipping the scales back in your favor. Honestly, Good was trouncing Evil until yesterday when I confronted three of the most pretentious ‘wipes I’ve ever dealt with in 20 years in my business. Going to slip back to vague-speak a bit here, but it was halftime of the Liverpool-Hull match and it was time to head to the bathroom and the press room for some split pea soup (I’m serious). It was my second trip to Anfield and I did not remember where the bathrooms were, so it took some time finding them, and then waiting in line for a spot at the trough and, blast it, a spot in line for the hand blow dryer…no towels. Anyway, by the time I was done taking care of business, which included burning my tongue on the soup, I looked at my watch and figured the second half was about to begin. Better head back to my seat.

Anfield’s press area is quaint, and the seat location is phenomenal, right at the midfield stripe, close enough to the pitch that you can here the players shouting at each other and the linesmen, and you can tell the difference between a well-struck ball and a shank by the sound of the ball coming off a player’s boot. Really cool. The press area is, however, as outdated as any I’ve ever worked in. The big problem yesterday was that, I was seated in a spot where three sportswriters would have to get up to let me back in to my seat. I arrived just as the second half was about to begin and the three gents who had to move their fat sportswriter asses to make room for me went ballistic. The first one slammed both of his hands on the table. The second huffed, “Are you serious?” The third said, “We waited for ages for you!” I mumbled that I was sorry…got no response…and quietly watched the second half. My sin cost three scribes about 11 seconds of viewing. I write about this only because I hope none of my colleagues would ever be so rude to a foreigner who entered one of our workspaces. I should point out that the fellow to my right, Chris, who did not have to move, was very cool. Score one more for Good.

I’ll stop whining now, just as Adam Duritz is done whining in my ears. Man, I used to consider Counting Crows among my favorite American bands, but Adam now grates on me. I mean, here’s a fat, ugly dude who dates supermodels. He should be much happier.

Ate me another “crusty” today in the train station. Learned that the place is actually called “Upper Crust” and I surely was confusing the name with the “Crusty Crab” where SpongeBob SquarePants works with Patrick. Sorry, honey, but I ate more bacon. This happens every time I come to England. It’s bacon, burgers and fish and chips and beer. I mentioned to my new friend Ian that I was not eating very healthily on this trip and when I told him what I’d eaten, he shrugged and said on his trip to the States – to Vegas – it seemed that all Americans ever ate was pancakes. “Bacon seems healthy to me,” he said. Here's to more bacon.

Nevertheless, I can feel my arteries hardening and by belly bulging over my sweat pants. Yeah, I’m looking sharp today in sweat pants and a wool Navy pea coat. One of those travel wardrobe nightmares (my wife would be ashamed). Wanted to be comfortable and there was no way I was going to squeeze the pea coat inside a suitcase. So, I look like an ass, what else is new? And in the land of "fashionable" jeans with all kinds of pockets and zippers...the land wear "hip" footwear still has velcro straps and looks very much like the bowling shoes you rent at the lanes (Hey, I've witnessed it) I don't feel all that out of place.

Brads, are we done with all this talk about soccer yet? How about a pilgrimage over to the Hammersmith Odeon or something? Sheesh.

Well, Jedz...my buddy is a drummer in this band...

This is a long way to go to lobby for a new set of luggage...With all of the sportswear connections you must have, no one has offered a rolling duffle? Next time Nike offers a set of irons, try to think more practically. Also, offer those sports "bards" a room temp Bud Lite to keep the foreign relations in the happy zone.

Well done, Brads. And while you're over there, mind the gap...you know, the big platform train opening. Pay a visit to Huddersfield for me (Leeds), specifically Upperthong and Netherthong...real places, no joke! I hail from the great Leeds area. And dude, my journalism friend, how do you really spell karaoke? Have a chip for me.