It Was a Good Year, After All 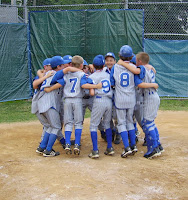 What good does it do to whine?

Sure, nearly half of our retirement savings is gone. Yeah, the value of our house -- once our "Can you believe what our house is worth?" dream-come-true -- ain't what it used to be. We just spent more than we (translated, "I") wanted on Christmas presents for our spoiled kids, but...

In 2008, I got to spend so much time with my family. What's better than that? OK, so I'm mad at my buddies for not planning a golf trip.

I got to coach both of my sons baseball teams. Got to see almost every one of their soccer games, too. I got to caddy four times for Tyler on the U.S. Kids Tour (his final year on that Tour).

Watched Tyler and Beau's teams win "town" Little League titles. And Beau's All-Star team won District 11. I had the honor of managing Tyler's 11-year old All-Stars and, even as we bowed out in three games in the Districts, we took part in three of the craziest baseball games ever. As my pal Tim Kurkjian likes to say, "You can watch a baseball game every day and still see something you've never seen before." Our loss to North Wall and our win over Ocean were proof of that.

I got trounced by both boys (10 and 12) in our Five-Mile Turkey Trot. Not even close to either.

I got to play a good amount of golf with my dad...something I treasure so much. And my dad also got to play quite a few times with Tyler, something Pops treasures, I'm sure. I was also happy when my dad accepted new irons for his birthday. Usually, Pops says, "I don't need new irons" and asks us to return them.

I took Tyler on an assignment, to beautiful Akron, Ohio...and he thought it was "awesome." I think what he thought was really awesome was that, for three days, he ate like a sportswriter.

Linda and I renovated our house (see before and after), turning it into our dream house. Now, we just have to pay for it.

We all got to see my nephew Michael score against Bayern Munich on television (that's him below). That was a great moment.

And we were able to get all the Bradleys together (Mom, Dad...Scott and Mary and Kevin, Kyle and Scotty...Rob and Lindsay and Michael, Kerry and Ryan)...along with me, Linda, Tyler and Beau...for Christmas.