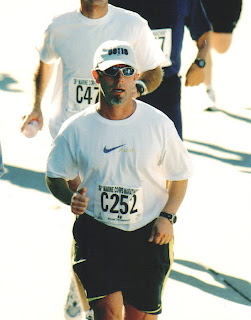 I've just started to train for my sixth marathon. I decided just the other day I will run Boston for the third time on April 20th and I haven't even informed my wife yet. She will say she understands and then when I'm off on some 2-hour run in February, she'll understand a little less.

When you run a marathon, most people focus on race day and marvel at how they could "never do that," meaning they could never run 26.2 miles. But the real tough part of running a marathon is not race day, it's the three or four months leading up to race day, when you have to dedicate yourself to logging mile after mile after mile, day after day after day. I believe anyone can run a marathon (hello, Oprah? Puff Daddy?), but not everyone can train for a marathon.

And the fact is, it's been four long years since I ran a personal-best 3:28 in Boston in 2005 and right now, I'm...uh...not skinny. My biggest struggle right now is that when I go out for even a modest 50-minute run like I did this morning, I come home wanting to eat a Jersey Mike's sub. I have learned in my past races that the only way to really train for one of these suckers is to not use all the running as an excuse to eat like Dom Deluise in Fatso (get the honey, Junior).

Finally, I think most people who know me well are not suprised that I've become a marathoner. The way I look at it, I was 37 years old before found a sport that suited me, the short guy with no speed or skill whose only positive athletic trait ever was that I tried really hard. And that's basically what it takes to be a recreational marathoner (the guys who run sub three-hours are something entirely different than me, Oprah and P-Diddy). You just have to try real hard.

My friend Nick, a former professional marathoner from Morrocco, has been emailing me a training schedule. Basically my job between now and Jan. 1 is to slowly build up my miles.

I will keep you posted as this thing evolves. I thought I was old when I ran one of these things at 37 and ancient when I ran one at 41. Just how the wheels respond at 45 is anybody's guess.
Tweet