The Greatest of them All 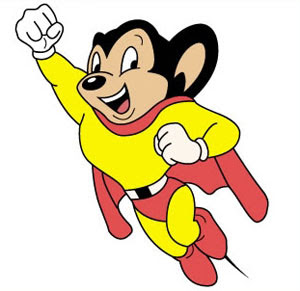 I will keep this short and to the point.

The greatest Super Hero of all-time is, without question, Mighty Mouse.

First of all, he's a mouse. When he went into a battle, he was always looking at a size disadvantage which affects everything from reach to raw power.

Secondly, he played during an era when the media did not cover super heroes the way they do now. A lot of of his deeds went unnoticed. Today, a super hero saves a village or colony and his face is everywhere. He's doing Anderson Cooper, not to mention Leno and Conan. The Mighty One did not go about his Super Hero-ly duties because he was looking for acclaim. Can the same be said for today's Super Heroes? Do we really know for sure?

Finally, and this is what makes it no-contest. Mighty Mouse could sing like Pavarotti. Go back and listen to the tapes. When he belted out, "Here I come to save the Day!" he always hit the note. And while opera may not be as popular as it was back in the day, his talent transcends.
Tweet

No way an ant could standup to all that the Mighty One had to face. And were Mighty Mouse a mere crooner that would be one thing, but he was an OPERA singer...totally different level. That's gotta count for something.

Atom Ant knows all the words to "Stand On It." And he can hit the note.